The Evolution of Weedy Rice in the United States 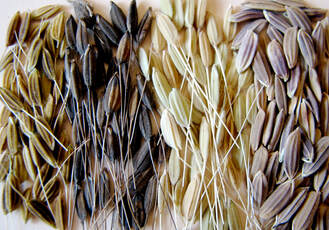 This project deals with the origin and evolution of weedy rice (also called red rice) in the USA.

Red rice is an interfertile, weedy form of cultivated rice (Oryza sativa) that competes aggressively with the crop in the southern U.S., reducing yields and contaminating harvests. Weed strains range from 'crop mimics,' which share many domestication traits with the crop, to strains closely resembling Asian wild Oryza species. Assessments of genetic diversity have indicated that some weed strains are closely related to Asian taxa (including indica rice varieties, which have never been cultivated in the U.S., and the Asian crop progenitor, O. rufipogon), while others show genetic similarity to the tropical japonica varieties cultivated in the southern U.S. This project seeks to examine the population genomic structure of red rice and the roles of foreign weed introduction, genomic introgression and selection in shaping the weed genome. The project will provide a comprehensive view of genome evolution in this weed and will contribute to public databases on Oryza SNP diversity, molecular markers, and linkage disequilibrium.

The Origin and Dispersal of Coconut

The impact of the coconut (Cocos nucifera L.) on the history of human dispersal in the tropics is unparalleled in the Plant Kingdom. As a portable source of nutrition and water, the coconut played a critical role in the ability of early humans to voyage, establish trade routes, and colonize lands in the Pacific Rim, coastal India, Africa and South America. The history of dispersal and domestication of this species is thus fundamentally intertwined with human history in the tropics.

Cocos nucifera L., a monotypic genus in the Cocoseae tribe (Arecaceae), has myriad uses as source of food, drink, and fuel. Every part of the plant is useful to man, and recently coconut oil has been manufactured into bio-diesel in the Pacific.
It is widely accepted that the cultivated coconut exists in two main forms, niu kafa and niu vai, which are distinguished by the nut-to-husk ratio and fruit shape. Coconut trees may also be described as belonging to "dwarf" or "tall" varieties. "Dwarfs" are short-stemmed, precocious, autogamous and presumed to be the more highly domesticated form due to their habit, low genetic variation, fruit color and occurrence near human habitation. "Talls" have long stems, are later bearing and allogamous. Due to its long history of dispersal, first by water alone and then by human activity, the identity and location of the origin of domestication is still unknown.

Through a project funded by the National Geographic Society we are studying: a) the phylogeography of C. nucifera and its ancient dispersal; b) the domestication origin of the 'dwarf' form; c) the impact of human activities in homogenizing population structure across the species range; and d) the genetic characterization of putative wild coconut populations. Molecular genetic markers including microsatellites (SSRs) and DNA sequence are being used in characterizations of genetic diversity. We will also use fossil evidence from India, New Zealand, Pagan, Australia and Colombia to corroborate inferred historical dispersal events. Sampling of putative wild coconuts will ultimately include populations from Melanesia, Lizard Island (Australia), Cocos Keeling Islands, the northwestern coast of South America, Polynesia, Micronesia, Madagascar, Comoros and Seychelles Islands.

This study on the origin of coconut domestication holds tremendous significance for understanding the history of human activity in the tropics and the impact of humans on the tropical landscape. This work will also contribute key information on the genetic diversity of wild coconut populations, an area of basic research that has long been neglected. Breeding programs in coconut have typically relied on an extremely narrow pool of germplasm, and genetically heterogeneous wild material has been excluded. Unfortunately, coconuts worldwide are now succumbing to lethal yellowing disease, and the need to broaden the genetic diversity in this crop has become acutely apparent. The proposed project will generate a wealth of information on patterns and levels of genetic diversity in non-cultivated coconut populations; this information will be a great asset for future crop breeding, identification of specific wild populations for germplasm conservation, and sharing of genetic resources among coconut producing countries in the developing world.

Our recent findings on this work are published here. (If you prefer to read it in Romanian, click here). You can also find an article highlighting this research here.