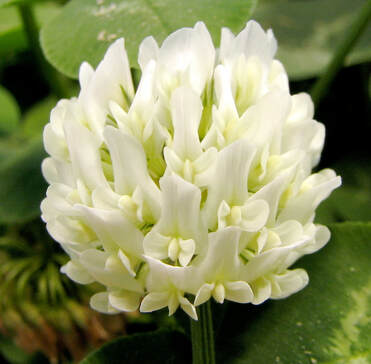 Overview:
Adaptation to local environments plays a key role in the ability of plant species to survive in various ecological settings and persist through climate change, yet the genetic and physiological mechanisms that underlie this process are largely unknown. This research examines the basis of local adaptation in a widespread perennial that is considered a textbook example of adaptive climatic differentiation, where fitness consequences of natural biochemical variation can be directly assessed in both the lab and field.

White clover (Trifolium repens L.) has evolved climate-associated differentiation in cyanogenesis (HCN release with tissue damage) in populations worldwide. Our previous work has determined the molecular basis of cyanogenesis variation and documented adaptive differentiation across climatic gradients in aridity and winter temperature. Preliminary data suggest that gene copy number variation (CNV) at cyanogenesis genes contributes to this local adaptation. While there is strong evidence that cyanogenesis serves as an herbivore deterrent, there is growing evidence from crop species that cyanogenic precursors may also function in abiotic stress tolerance. Putative functions, which include nutrient storage and transport, osmoprotection, and oxidative stress mitigation, remain uncharacterized, and their potential adaptive significance in nature is untested. White clover is genetically tractable and easily manipulated through field experiments in the environments where adaptive differentiation has evolved, making it highly suited for testing hypotheses on the genetics and physiology of cyanogenesis and climatic adaptation.

Through work that integrates QTL mapping of fitness traits, candidate gene analyses of two well-characterized biochemical polymorphisms, and physiological assessments of their fitness impacts, the following questions are addressed: 1) What is the genetic architecture of local climatic adaptation? Specifically, to what extent does it arise through fitness tradeoffs for alternate alleles of individual genes (antagonistic pleiotropy), or through combinations of loci where individual genes provide a fitness benefit in one environment and are selectively neutral in others (conditional neutrality)? 2) What are the physiological mechanisms by which cyanogenic glycosides function in abiotic stress adaptation? 3) What is the role of gene copy number variation (CNVs) in local adaptation?

Intellectual merit:
There is increasing evidence that plant secondary compounds may play important roles in primary metabolism. This work will rigorously test the function of cyanogenic glycosides, which are found in >3,000 plant species including many crops, in abiotic stress adaptation. At the genetic level, local adaptation is often assumed to occur through antagonistic pleiotropy, and this assumption forms the basis of popular genome scans for detecting genes under selection. Yet very few studies have tested this assumption in nature. This research will determine the contribution of antagonistic pleiotropy to climatic adaptation, and it will assess of the importance of well-characterized candidate gene polymorphisms in relation to other genetic factors. CNVs are abundant in the genomes of many taxa, and there is growing evidence that they may play an important role in natural adaptive variation; remarkably, their fitness impact in natural populations has never been directly assessed, as will be done in this research.

Broader impacts:
The ability of plant populations to adapt to climatic variation will be critical for continued worldwide crop productivity and for persistence of wild species through climate change; this research provides basic insights into the mechanisms by which climatic adaptation occurs. The project will engage high school students and teachers nationwide in hands-on, inquiry-based learning through an ongoing and highly successful outreach program based on clover cyanogenesis. Students sample and analyze their local clover populations and contribute data to an online database, where they can compare observations with classes from other climates. Undergraduates will be recruited for internships providing training in lab and field components of plant biology and evolutionary genetics; students from under-represented backgrounds will be targeted for recruitment through the WU uSTAR and UF Agronomy programs. The project will provide training in plant physiology and evolutionary genomics for two graduate students and two postdocs, and it will foster new academic partnerships between four U.S. research institutions.